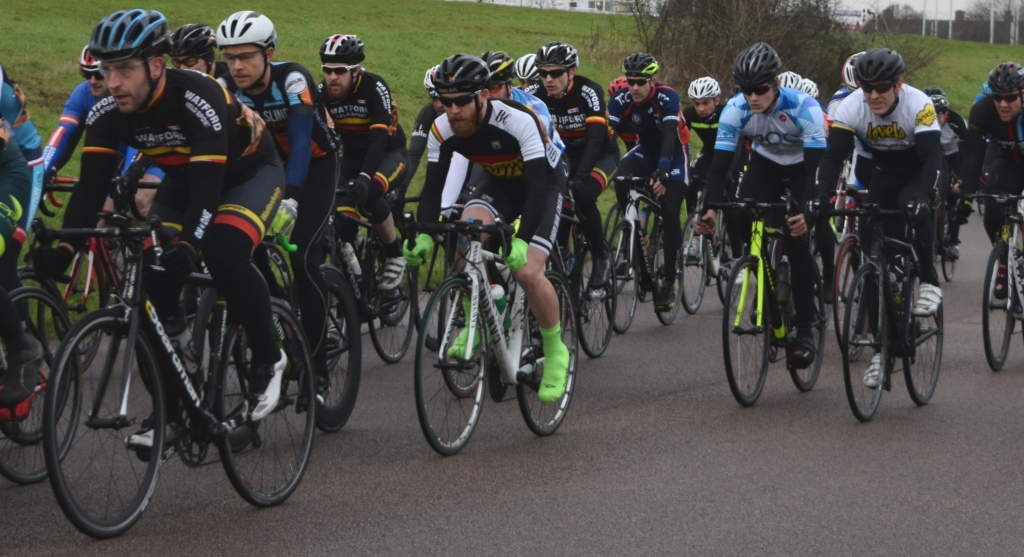 … and CX racing at Kettering.

Nick C, Nick D, James, Spence, Matt V, Melinda, Beth and Hannah were out in full force at round 6 of the Hillingdon Imperial Winter Series. Backup was in the form of Mark Harris from Lovelo with a full compliment of spare wheels and enthusiasm.

Weather conditions were good and the race started on time.

All the team showed strongly in a large peloton. James started to drop down the field but the team helped keep him in the pack. Beth kept with the women’s bunch but lost the pace after 10 or 12 laps  and time trialed the rest.

Louise Surridge (Velo Club Londres) made a successful break stick for the last 4 laps and went on to win the women’s race with more than half a lap lead. Fantastic achievement as Louise is 17 years old and on junior gearing. Melinda and Hannah contested a sprint finish with provisional placing of 9th and 12th respectively.

On the final lap of the men’s race there was a crash (no-one seriously hurt) and the boys finished in the bunch.

Josh Curtis (racing for Berkhamsted Cycle Club) competed in the Central League CX round 14 at Kettering and finished 3rd.

A fantastic result for Josh as this is his first full year of CX racing. The last official placing has Josh 8th overall in the league but that has moved up a couple of points (tbc).

There is one more CX round to go hosted by Welwyn Wheelers on Sat 6th February 14:00 at Stanborough Park, Stanborough Road, Welwyn Garden City, AL8 6DQ.
It would be great if fellow BCC’ers were out to cheer him on.