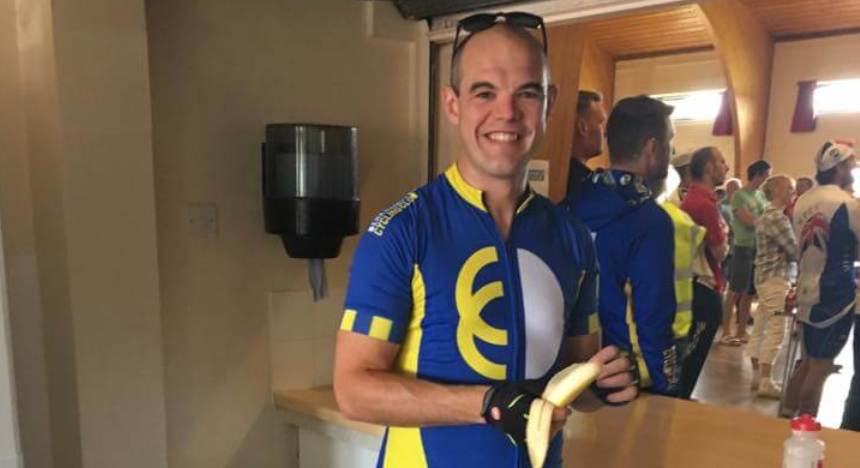 When Plan A falters, resort to Plan BCC…! Sunday 6th August 2017 saw the inaugural Berkhamsted Cycling Club Road Race go off in a blaze of blue and yellow, under sunny skies and in front of a significant number of fans enjoying the spectacle of a full field of 60 local racers doing biking battle.

It was a great success, especially since for a long while the inaugural event threatened to be delayed to 2018. Four major road closures on the original circuit meant that with just days to go, the whole Race (course, HQ, risk assessment, banana cake and all) was moved to the 4.4 mile loop heading NE out of Mentmore. If you see Richard Metcalfe around town, buy him a beer. His phenomenal efforts, together with those of the rest of the organisational team (including Jez, Alex, Michael, Simon, Chris, Jo, and the organisers of the morning emergency services race), ensured that from the riders’ perspective, the transition was seamless. 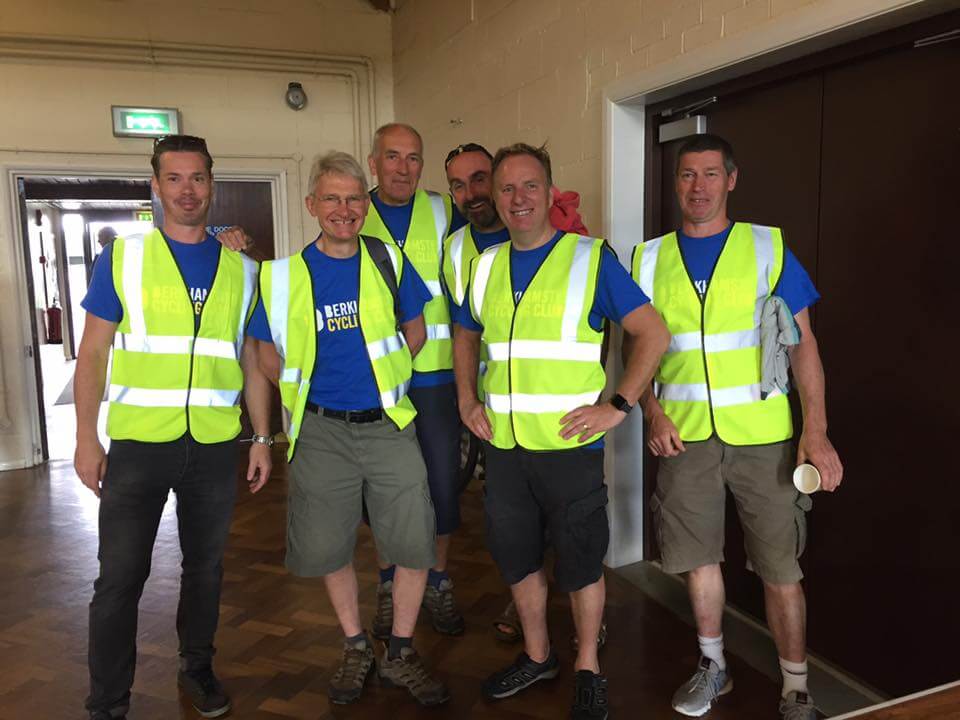 From arrival, the HQ was awash with BCC T-shirts and friendly faces, the club putting on a fantastic show. Representing from within the peloton were racers Matthew Buckle, Simon Pearce and James Taylor. With Simon Voysey in the lead car, the neutralized section headed out from the Cheddington HQ, up the climb past the Stag into Mentmore and then right at the Green, onto the descent and the start of the course proper. The flag dropped soon after the turn and the race was on. In a field of 60 riders at 45mph it is an exhilarating descent into a couple of gentle bends, before a tight left at Ledburn. Anyone dozing during the roll out was soon woken up! 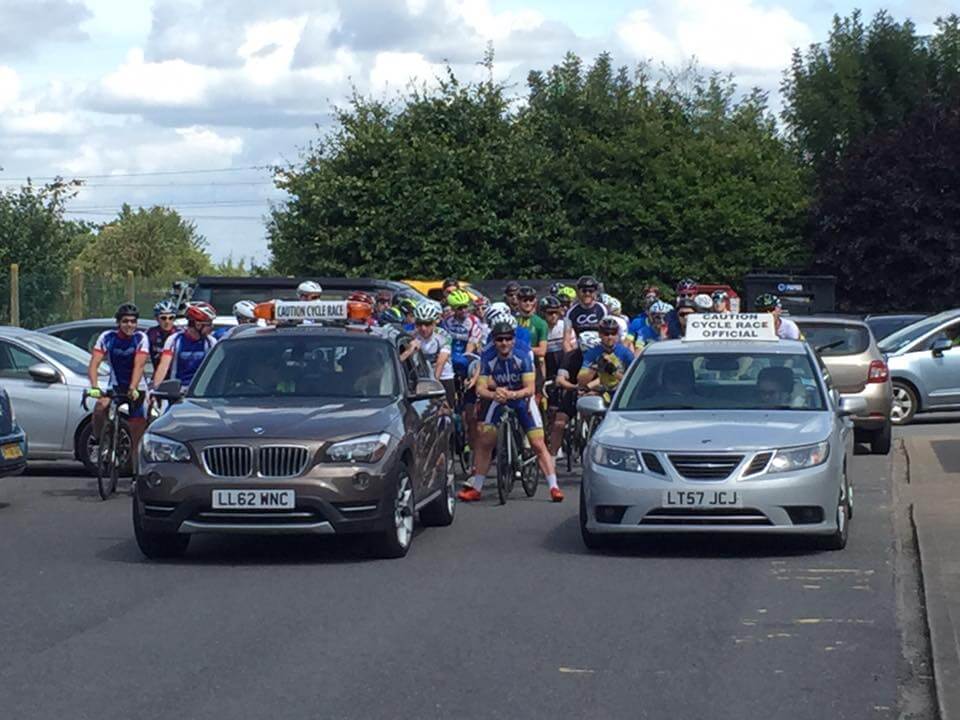 It should be mentioned here that the marshals all did a superb job, and all of the hazardous parts of the circuit passed without incident. Fantastic flag waving. 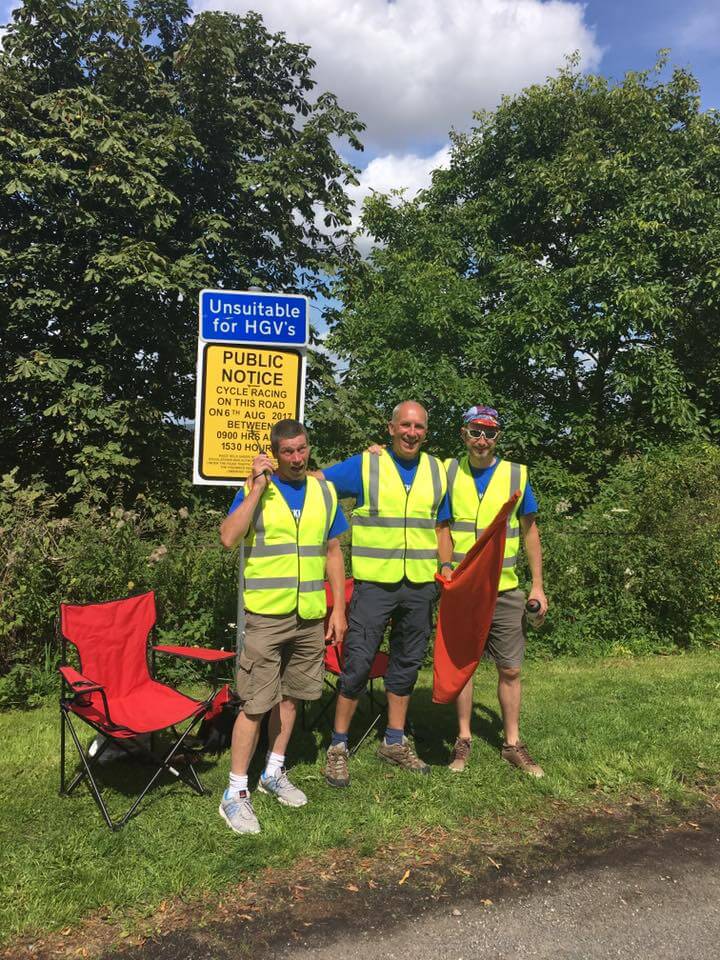 From Ledburn is a long gentle drag up to the crossroads where the course turns left back to Mentmore. A headwind on this section set the tone for the race, making it difficult for anything to get away and stick. From that turn, the road continues creeping up, through a left then a right before hitting the final climb into Mentmore (going the opposite way to our TT course). This starts gently enough before ramping up to 8% in the middle and hitting 11% just before the end. The finish line was placed half way up this part of the climb. The 10 lap parcours meant 9 times over the full hill as well as 10 opportunities for spectators to shout their support, which was hugely appreciated by all.

On lap 4 came the first of two intermediate sprints: the primes. Half-sniffing glory and half-looking to cover any attack that came off the back of the first prime, Buckle moved up on the back straight and was well positioned after the turn towards Mentmore, sitting in about 9th wheel. He took the final bend well and manoeuvred for the sprint to the line, but couldn’t quite come around a strong Bob McGlue from High Wycombe, who took the Prime with Buckle just behind in 2nd. 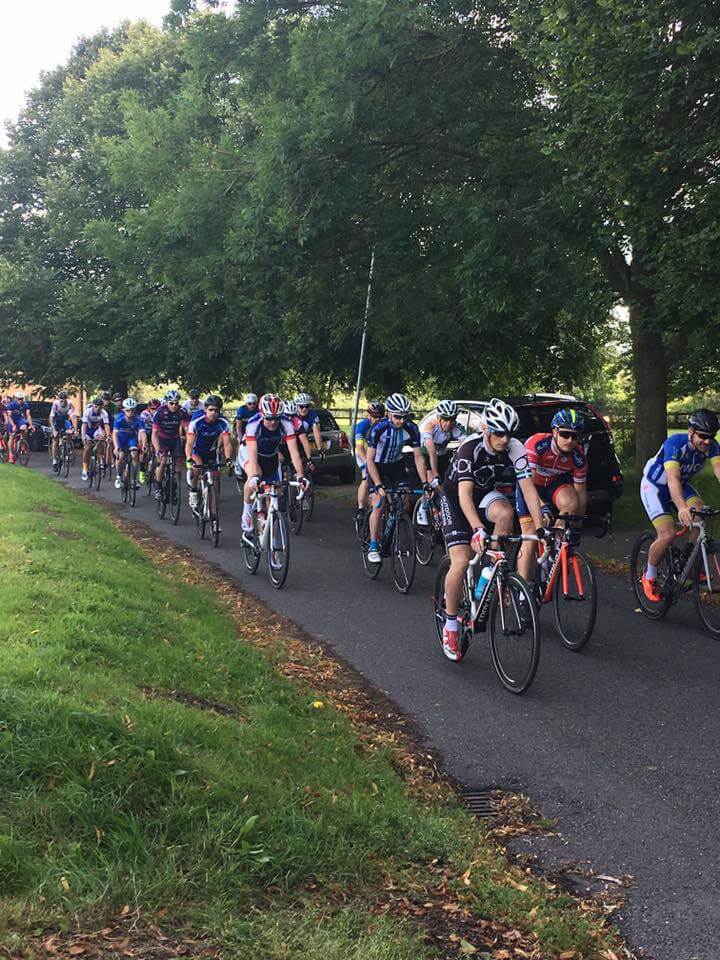 The race settled back down again as people recovered from their effort, and the second prime on lap 6 was taken by a small break. There were various attempts to go off the front throughout, always tempered by the peloton’s speed down the descent, the headwind on the back-straight and a tight grip on strong elastic – no-one was let off the leash for any great length of time. Simon Pearce was comfortably moving around the pack, including having a small dig with another at the front. He revealed afterwards it was because he had looked over his shoulder, realised he was right at the back, and so had decided to make his way to the front! It was another move that didn’t last long though with the peloton on high alert. However, with just over a lap to go, two guys pushed hard off the front, one going clear and another trying to bridge across. For almost a whole lap the peloton was playing the fine balancing game between giving the escapees just enough rope to hang themselves and letting them slip away. With 5 in the race, Veralum were doing a decent job on the front, just keeping the break marked, and when the race headed down the back straight again for the last time, Buckle again looked to move up to position for the final turn into the finish section.

Right at that moment, from nowhere, BCC’s James Taylor (to that point playing the Steve Cummings role, hanging around at the back), set the finish alight and took it to everyone. He launched an attack down the right-hand side before the final left turn towards the climb to the finish. His move stretched the peloton out of the crossroads as he led the chase through that final left turn and into the final bends on the approach up to Mentmore. Buckle hit his highest wattage of the day (1200w) to stay with the race at this point as the peloton accelerated hard out of this bend on James’ wheel. Through the final left and right bends in the road, James’ effort began to fade and he was swamped a little, but it was a move that had worked well for Pearce and Buckle, who with the practice of the Prime Lap, positioned himself well out of the final bend and came into the finale pretty nicely placed.

It was then a slightly messy final sprint as, in true pro-style, the break was caught just 250m from the line. Buckle had surfed a decent wheel and then managed to time his acceleration well to squeeze through a gap in the middle and come past a couple as the climb started to bite. With several riders looking for the same gap he just managed to edge out Lovelo sprinter Matt Vallis to reach the line in 6th overall, Vallis in 7th. Meanwhile Jared Millar of Veralum had timed his kick perfectly to get away and seal a strong win. Bob McGlue added to his prime with 2nd overall. Simon Pearce also showed good power in the finale, coming home a very creditable 20th despite finishing with a slightly buckled wheel after he narrowly avoided an unfortunate crash. He was luckier than James who unfortunately got caught up in it and flipped over the handlebars, mercifully damaging his helmet and his wheel rather than his head. A couple of others were not so lucky, with a suspected collarbone the worst of the injuries. It was ruled a racing incident and put only a slight dampener on an otherwise fantastic day for the club and for cycle racing in the region. It’s brilliant that such a young club can not only host but also enter and compete in the local racing scene. 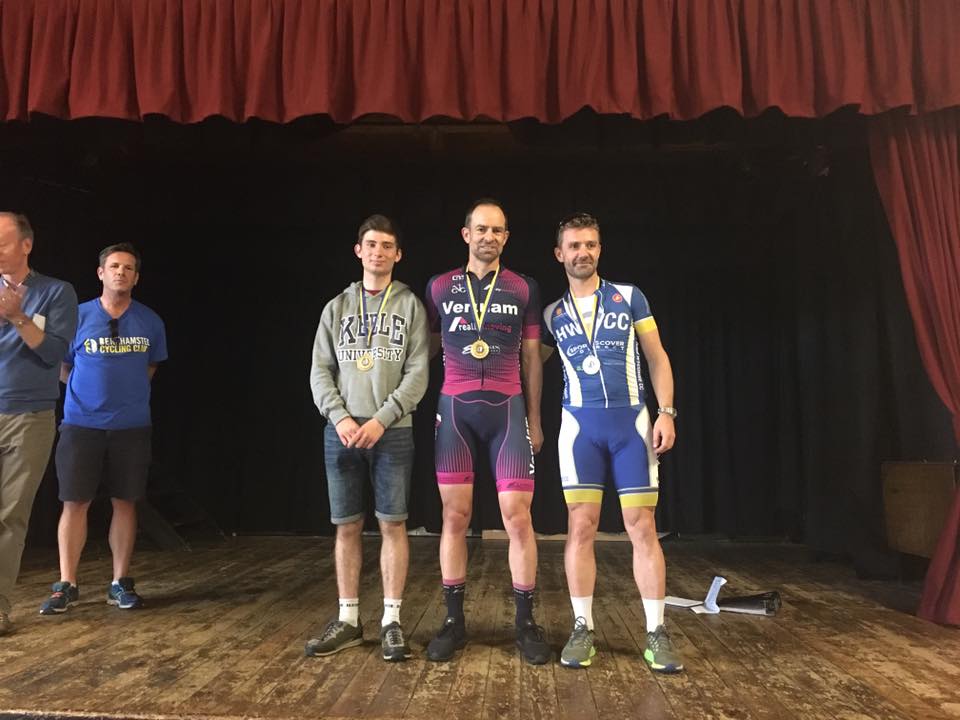 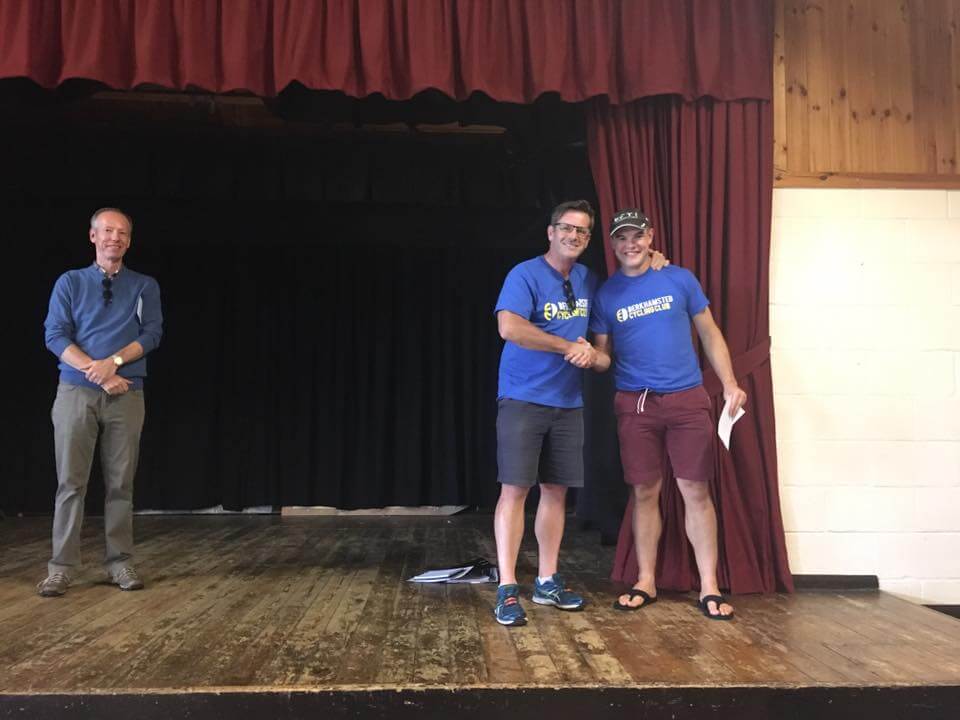 For those interested in the competitive side of the club, please get in touch with Richard, Matt, Simon or James on performance.berkocc@gmail.com who would be happy to help you find out more. The racing section has gone from strength-to-strength this year, with participation, points and promotions. There are three road races left in the Central Road Race League this season, and it would be great to have BCC representation at them so why not give it a go!