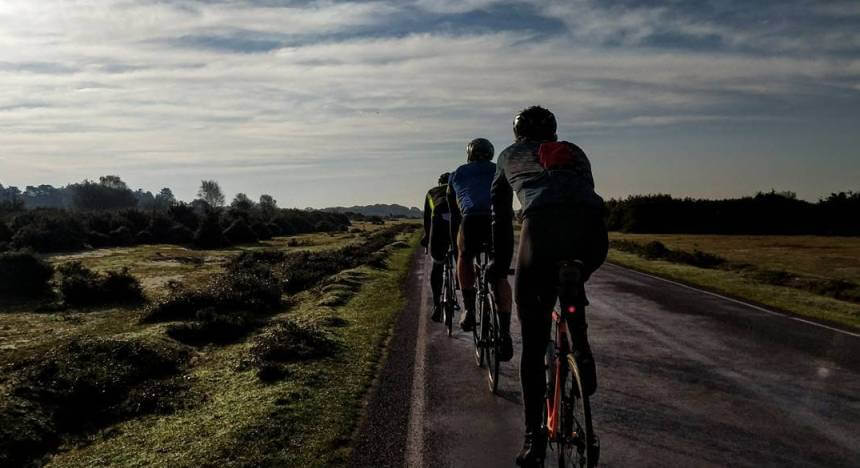 On the 29th October four members of the club went to the Isle of Wight as a change of riding scenery to Berko and surrounding areas.
Lee Morgan (one of the four) has penned a great article on the adventure…

After meeting through the cycle club a year ago, Myself (Lee Morgan), Alex Edgar, Tommy Wong and Tom Newton decided we should test our Chiltern cycle legs abroad (well, the Isle of Wight!).

We headed down to Cowes, IOW, on a Saturday with a plan to do a quick leg loosener cycle in the New Forest on the way to Southampton.

We arrived in the New Forest nice and early. We had gone all out at McDonald’s on the way down with a minimum £10 entry buy in to get the show on the road. Alex Edgar drove down with a handy 4 bike roof rack. I must add, his road rage is nowhere near as bad as his bike rage. (Something we are working on with him to improve). It was freezing cold but clear. We had our thermal base layers on for the 4 Degrees outside! Tom N didn’t need a base layer. We were envious of his own grown merino wool carpet he expertly modeled on his chest before zipping his jersey! We hit the New Forest roads at 8am. 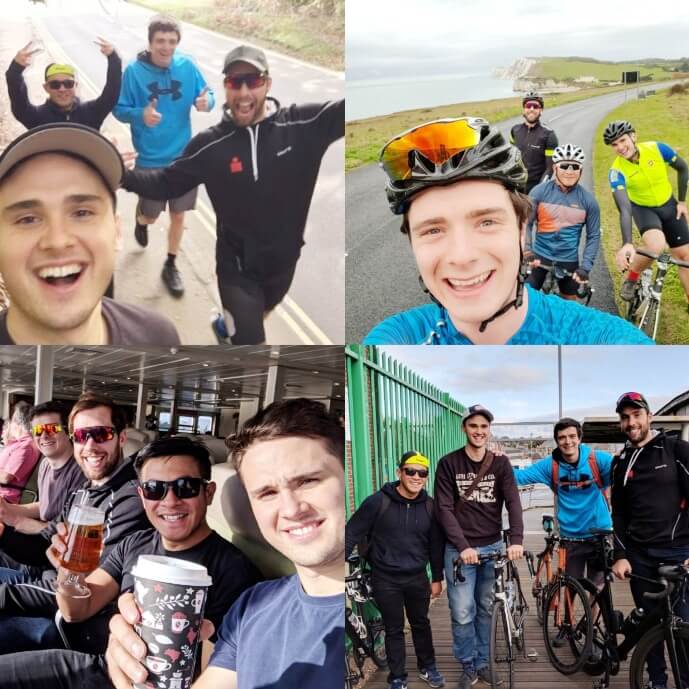 Credit to Tommy Wong for the video.

Soon after we started cycling we spotted as what can only be described as the happiest pig in the world. He was bounding across the road not a care in the world. It was at that point we decided we each individually needed a selfie with a wild animal. Alex got a shot with a pig, Tommy was the horse whisperer, I got up close and personal to a cow (who nearly urinated on me) and Tom N was in hunt for the illusive Donkey. We saw one but we were travelling at like 45kph down what used to be an old runway of a road that runs through the middle of the forest. A cracking segment!

Shortly after finishing our short but stunning ride in the New Forest we set off to Southampton.

The 1 hour ferry crossing to Cowes from Southampton consisted of many beers (not for Tom N who was doing Stoptober, boo). We studied every sail boat to see if we could see Matt Norman at the helm! 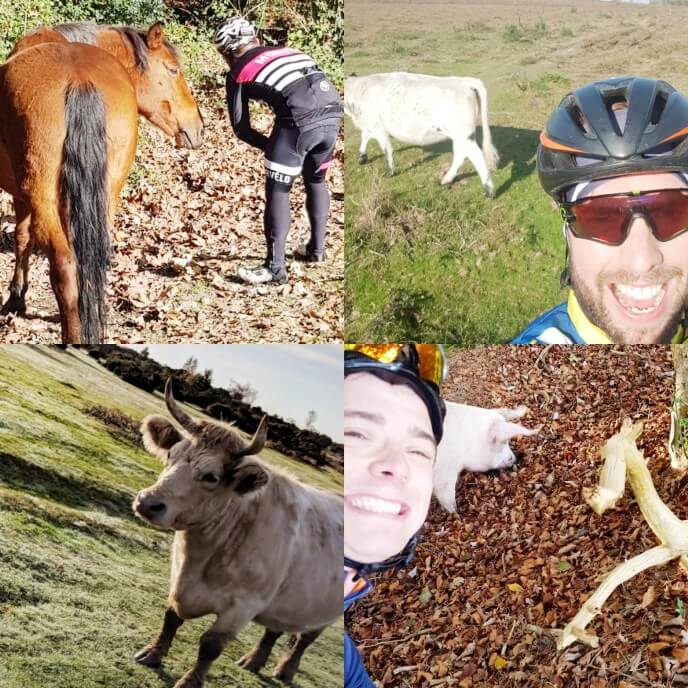 We arrived in Cowes, IOW late Saturday afternoon. After a quick shower at the B&B we headed into Cowes to top up our alcohol levels…. Um… I mean carb loading! The locals are very “interesting” and we ended up partying late into the night singing all the Uni ballads covered by a live band in a back street pub! We met a guy called Mark whose illustrious career as Amy Winehouse and Pearl Jam’s music producer had taken a turn for the worse and he appeared to be stuck on the Island! He was none the wiser though as apparently I was a dentist and Alex a Ryan Air pilot.

We did not need to load a GPX route to do an island loop. The Isle of Wight have kindly sign posted a short and long route all the way around the Island.

We set off first thing nursing slight hangovers. Tommy was keen to leave the B&B ASAP after sharing a bed with Alex that night. We still have no idea what happened in that room. I had the joy of sharing a room with Mr Merino Wool Chest hair himself! We immediately found the first sign for the loop and got spinning. The skies opened briefly, but the weather was fantastic. 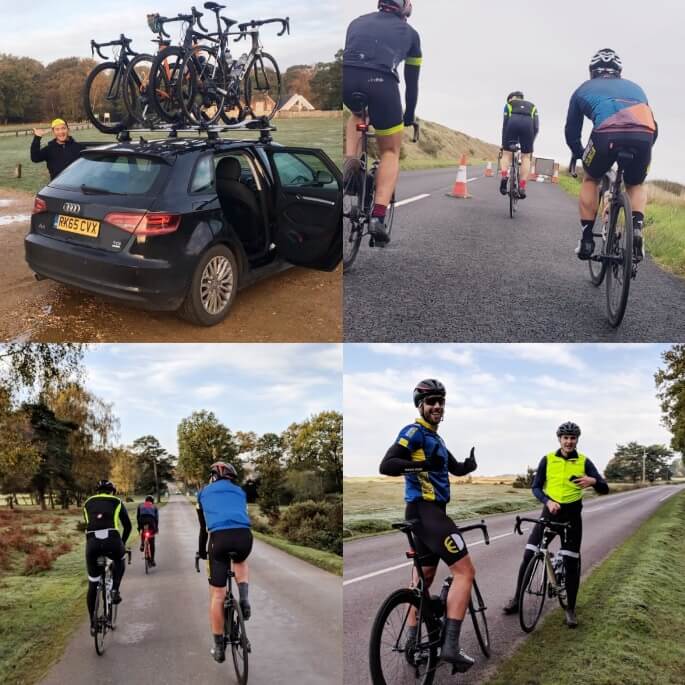 There was a section on the ride where you are rolling up and down the cliffs, overlooking the ocean. It was truly breath-taking. (It didn’t have anything on the Mentmore loop though). The roads themselves were extremely quiet and very smooth. We did do a 2km section across a gravel canal like path. It felt very much Paris-Roubaix for that 2km’s and we were all praying the “P” word wouldn’t occur.
The Island was lumpy to say the least and you certainly needed so climbing legs for the lumps and bumps. We found ourselves taking more and more coffee stops, but they were great and the locals really seem to envy us guys who go there to cycle around their Island.
We completed the 100km loop all feeling completely shattered but agreeing that was one of the most spectacular rides we have done this year even if it did have over 1,500m of climbing. Both Tommy and Alex somehow managed to delete their Garmin activities, so if it’s not on Strava it didn’t happen! Me and Tom N kindly shared our activity files with them, so don’t believe Tommy’s Power Output when you click his activity, that was all me!!!

Credit to Tommy Wong for the video.

It was such a simple and straightforward trip. It could easily been done in a day. We would highly recommend going there and give us a shout if you need some tips on accommodation, routes. (We became very familiar with Paula and her B&B. She even joined us for drinks!)
Next stop, a cycle holiday to Sri Lanka? We’ll let the singleton Alex tell our wives / wives to be that we are going to disappear for 2 weeks. 😊 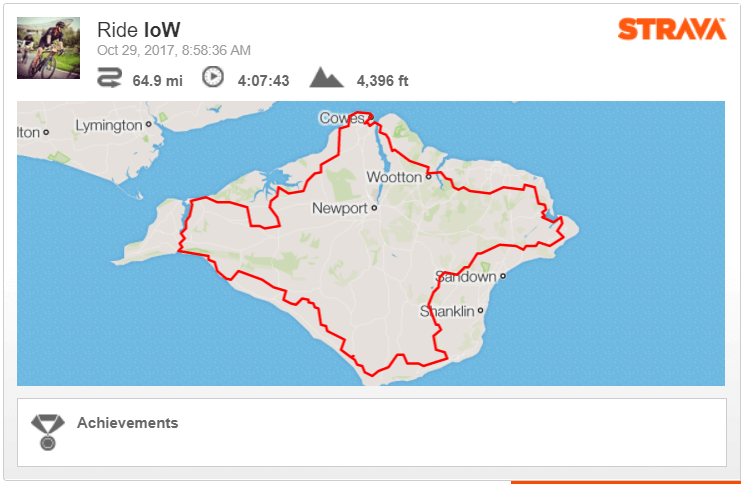