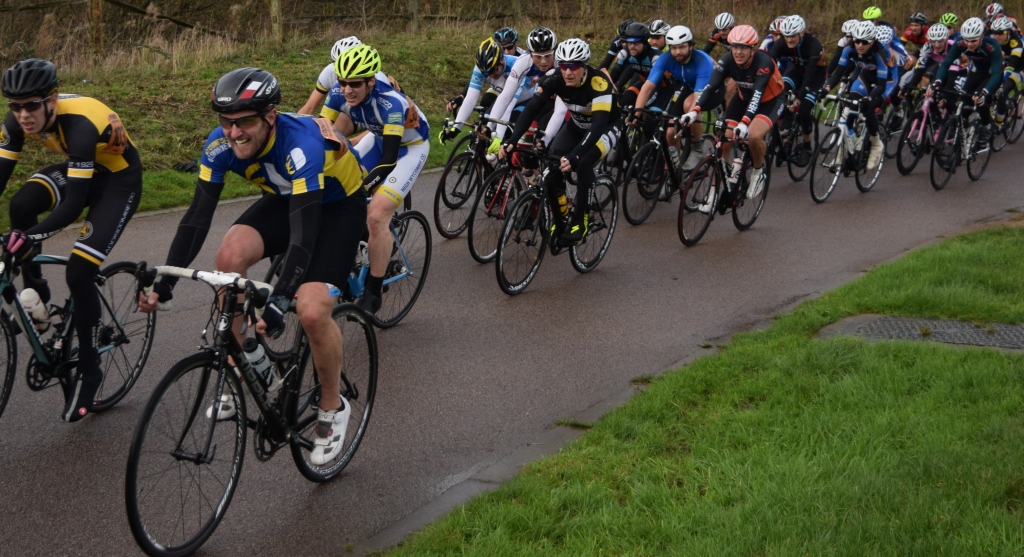 Saturday 9th Jan saw round 4 of the Imperial Winter Series at Hillingdon, another full field with racers from BCC and Lovelo RT women’s and men’s teams.

This was Vincent’s first crit race and James’s second, both a little apprehensive but raring to go. Seasoned racers Nick and Matty (well, his 3rd race) were as determined as ever.

The women’s team of Melinda, Sam, Hannah and Bethany were in good spirits and hopeful for a win.

The conditions were good for the time of year; damp track, no rain and moderate wind. Support was at hand from Tim Warrell, Niels, Alison and a few other BCC members.

James started strong but just couldn’t keep on the pace. After the race he said ‘Well I was in the bunch for 14 minutes so an improvement on my first race! James will be back… he has the bug! Vincent kept a good pace but it wasn’t enough to keep in the bunch. Both did a great job and finished together.

Hannah punctured after 5 laps and had to stop for a wheel change (racers are allowed 1 lap out for mechanical issues) but had to pull out as the spare wheel wasn’t right. Beth was in the mix but the pace proved to much and she time trialled round, mainly in the company of a Welwyn Wheelers rider. Well done Hannah & Beth 🙂

Both Nick and Matty had a couple of mechanical issues but had strong rides with Nick pulling hard on the front and Matty close by. Both finished in the bunch. Matty is determined to win and it may not be to far away.

Melinda, Zoe and Sam had a great race and finished 4th, 10th and 11th respectively.

Fantastic result for all 3 and more so for Melinda as she only had 2 or 3 gears for most of the race!