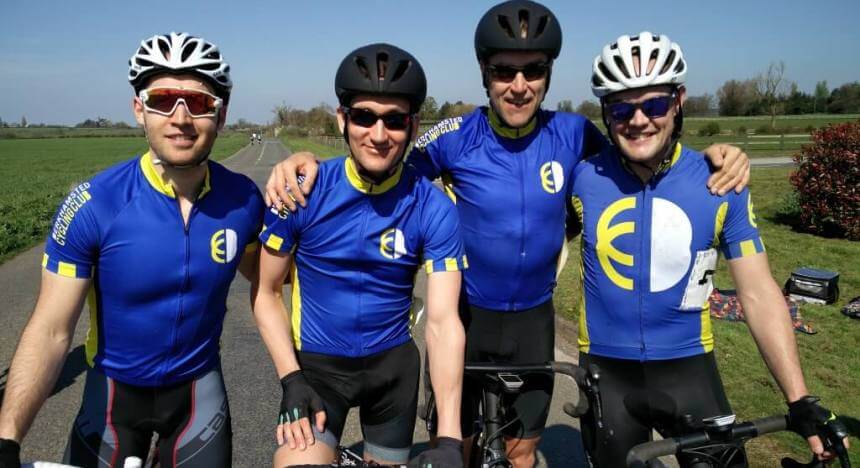 Four of the BCC Performance team lined up for the Lovelo CycleWorks 50 mile Road Race on the 9th April 2017 at the Wing/Soulbury/Stewkley circuit – Ben Conradi, Alex Jump, Simon Pearce and Matt Buckle.

It was a very tough race with Matt finishing 20th and Simon 32nd, Ben and Alex pulled out as they had become detached from the bunch. Lots of lessons learnt! Matt has written up a review of the race below, a fantastic read and insight into life in the fast lane!

Matt’s eye view of the race…

Reflecting on the race, I really enjoyed it, a little disappointed not to come away with anything but some key lessons learned I think. Long post but thought I’d share my thoughts. I felt comfortable and strong but I think I made three critical mistakes which correspond to having to make 3 big efforts which left me with too little for the sprint:

1) My plan was to tail Marcel Six and do what he did. About 2 laps in, the break was established and 2 from MK and 1 from Veralum CC (Marcel’s team) were counter-attacking off the front of the bunch with about 15 seconds. Marcel moved off to the side and full-bore sprinted across the gap. I hit 1200+w to go with him and bridge across. As soon as we got there an MK guy said let’s work. I was blowing from the effort and Marcel didn’t go to the front so i sat and waited for one of the others to take it up. No-one did and we slowly went back to the bunch. In hindsight, I should have pressed on and taken it up. It was a strong 5 and we maybe could have gotten away to attack the break but the two sets of teammates probably weren’t sure if i would be strong enough so i should have shown them straightaway and given the move some impetus. As it was it ended up being just a completely wasted effort.

2) Later, back in the bunch (Marcel punctured and retired) I drifted too far back into midfield, which was crash territory. I spent most of the race in the first 10 or 15 but at this point I drifted too far back, a few crashed in front, I hit a guy on the deck but had slowed enough not to flip over him and managed not to go down. A second with my foot down on the ground to get around the carnage and to realise that everything was OK and then I had to sprint again to get back to the bunch that was speeding away. Thankfully there were three of us who managed to help each other back in and i sensibly went straight back to the front to avoid more trouble, but it was another match burned unnecessarily.

3) With around 25-30km to go, all urgency had gone from the chase as too few people were willing to work at the front (I did a couple of pulls, Matty did huge turns). A couple of guys were frustrated and there was some chatter, so Matty and I agreed to counter-attack. We gapped the bunch and two guys came across with us, but one authoritatively said that without at least one more we wouldn’t make it. He was almost certainly right and we ended up sitting up again. We tried a couple more times to get something away but by then it was never going to happen. In hindsight, I should have realised that by then a counter wasn’t going to happen and I should have sat in and conserved energy for the sprint for 4th.

Of course, not getting in the break that turned out to be the winning move might count as a mistake too but that was deliberate since I expected that to be brought back and it seems those guys were very, very strong.

Great experience though and great day for the club having a full complement in a road race and adding plenty of blue and yellow to the peloton. Great sunny day out and encouraging for early season.