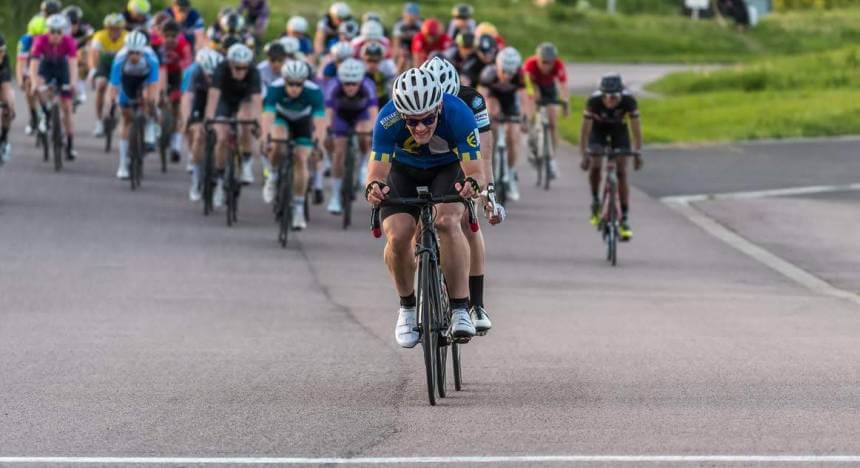 The Academy got it’s first win in a while as Matt finally put his knowledge of Hillingdon to good use and won the cat 3 race.
Here is Matt’s account of the race…

“Epic race and splintered all over. Brutal headwind in the finish straight but a breakaway of 4 went from the gun, then dropped 1 to become 3 out front. It seemed a strong group so I helped pace at the front but it was pedestrian and disorganised in the bunch and the gap got out to about 30 secs. 3 more guys jumped off the front and got a gap.
Shortly after whilst pacing at the front I actually found myself sort of rolling off the front and with a little gap of my own. Rather than sitting straight up I decided to steady time trial just to make them work to bring me back. Then found a groove and found myself catching the 3 and growing the gap to the bunch. So I pressed on for about 4 laps solo in the gap, which was super hard – basically 600w intervals into the headwind each time up the finish straight, then trying to recover the rest of the lap whilst cornering as fast as possible.
I was closing, closing to what had become 6 out front. Then just as I was starting to really suffer, the cavalry arrived in the form of 4 more attackers from the bunch. I managed to latch onto them and buy my way out of a couple of turns but then started pulling through with them. We rode really well as a 5 to catch the 6 ahead with about 3 laps to go. We worked together enough to hold off the now fast chasing bunch.
A guy tried to attack with the break from 1.5 laps out but we had him marked and so a joined up breakaway of 11 went together to the sprint. I got a great position and latched onto to the wheel of a strong guy who started his sprint with about 200m to go. I knew I wanted to leave it as late as possible into the headwind and left it to the last 75m before I moved to come round him and made it just before the line.
First win for a LONG time!”

Other Academy racers were competing in crit, TT and road race events.
James and Matt at the Verulam – reallymoving Road Race on 20th May.
Matt punctured with two laps to go and despite a huge effort to re-join the bunch the pace was to high.
James found the brutally high pace difficult to maintain; 45mph down the descent, into walking pace / gravelly bend into sprint, into 30mph back to the turn, up and over Mentmore and repeat x15.
Both were very appreciative of the support from club members on the course.

Jack raced in the Somerset Road Club cat 4 crit at Torbay Velopark on May 19th. A hard race and he stayed with the bunch until the last lap.
He also competed in the Milton Keynes Bowl cat 4 crit race on May 24th and was in with the bunch sprint until 400 meters to go when Jack had to break hard to avoid an incident.

Jack is improving race-on-race and it’s only a matter of time before he’s in the points.