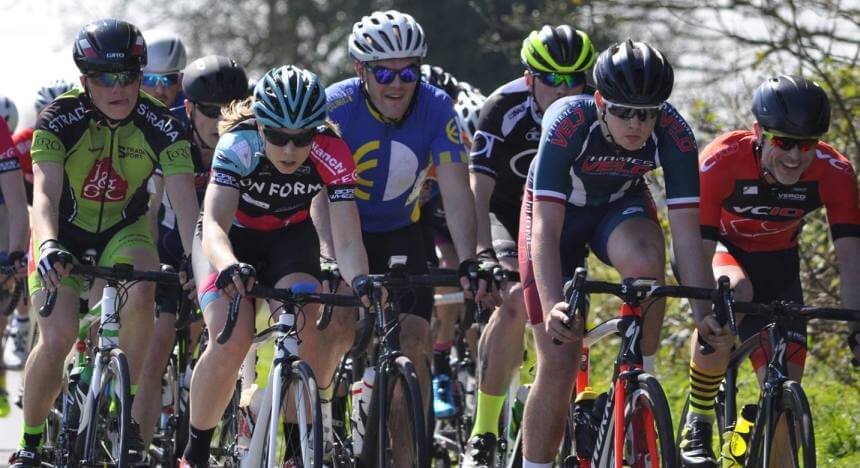 Matt Buckle was racing at the Thames Velo road race on the 30th April 2017, the 3rd race in the Central Road Race series held over a fast course near Oxford.

Following is a race report from Matt, another fantastic read…

On May bank-holiday Sunday, the third round of the Central Road Race League (BCC is hosting a round in August) was held on the flat and fast Drift Road circuit near LEGOLAND. It was, in a word, quick. A total of 77 riders clipped in, with BCC represented by Matthew Buckle and other local interest in the form of Lovelo riders James McGahern, Matt Verrinder, Mike Kazer and Nick Clarke.

After a long-neutralised section, the flag dropped and the pace was hot. Measured at surface level, the velocity needed to escape the earth’s atmosphere is around 11.2km/second or 10x the speed of a rifle bullet. The escape velocity required to break from the Thames Velo peloton was in a similar range as endless flurries of attacks went off the front, only for the escapees to be irresistibly sucked back into the fold by the unyielding gravitational pull of the peloton.

There were flashes of Blue and Yellow as Buckle jumped with a couple of attacks and helped to chase some dangerous moves. A suicidal solo move by Nick Clarke looked like it might finally cause a ceasefire behind, only for others to take up the chase, and the pedal was back to the metal once more. At this kind of sustained pace (average speed was 27mph/43.2kmh for the 45miles/72km distance), it began to look like the elastic would never snap. Indeed Buckle was guilty of assuming that nothing would get away and he began to sit in a little.

And then it happened. A slight lull inevitably meant yet another big attack went down the right. This time it turned out to be the right time. As the pace had eased the front of the race had become bloated and Buckle found himself slightly boxed in the left gutter, as the attack went down the other flank. It was part tactical error, part poor positioning, part bad luck. And partly it was great team tactics. Henley and Watford riders deliberately blocked at the front as they both had teammates in the 5-man break.

With around 25km still to go and the 5 escapees still in sight, Buckle, Luke Houghton (a strong Junior from Veralum), a pony-tailed rider from OTRT, Nick and a couple of other contributors got a chase nicely organised with 6 or so riders rolling through and off at the front and clawing back time. Here again though, teamwork advantaged the breakaway. Infiltrating the paceline of the 6 or so genuinely working at the front were 2 from Henley and 1 from Watford, ever so subtly rolling through but then slowing the pace to disrupt the chase. It was good tactics and it worked to give the break the edge. Buckle learnt the lessons of the Lovelo Road Race (where he burned too many matches on a futile chase), and began to focus on the minor places.

With maybe 60 riders remaining in the bunch and a tailwind down a long, straight road to the finish line, it was always going to be an interesting sprint. Bunch sprinting is one of those things you either love or hate. It is like a chess match played at 37mph and 95%+ of your max HR, as you make a thousand calculations per second, taking a position, choosing a wheel, timing your gear change, ultra-aware of everything around you. It is the paradoxical feeling of floating in slow motion whilst the speed cranks up and up and up as you wait and wait and wait for the moment to hit the after-burners. Buckle chose a good line and was on a good wheel with 300m to go, staying seated and whizzing the pedals patiently as the wheel in front climbed from the saddle 200m from the line. Wait. Wait. Go. As the road rose to the finish line, Buckle was accelerating whilst the two in front of him faded and a guy came up the right fast. With around 50m to go it looked like he had timed the effort to squeeze through a gap and take the line but alas the gap widened slightly too late, preventing the after-burners from firing, and with the tailwind the finish line came just a little too soon. Despite a tight finish, Buckle could only claim 4th over the line from the bunch, for 9th overall. Still, as a Regional B race, 9th was worth 2 BC points and £10 cash and the BCC Race Team ticks off another of the 2017 goals, by scoring our first points in a road race.